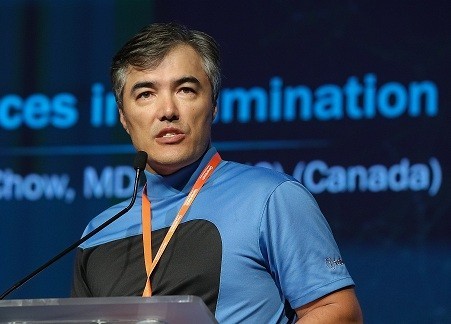 Dr. David Chow is an Assistant Professor and director of the Vitreoretinal fellowship at St Michael’s hospital, University of Toronto, and Co-Director of the Toronto Retina Institute. He completed his medical degree at the University of Toronto followed by a fellowship in Ocular Pathology and then Ophthalmology residency at McGill University. His vitreoretinal fellowship took place with Associated Retinal Consultants in Royal Oak, Michigan at William Beaumont hospital. His first staff position was at McGill University where he worked for 5 years as the Director of Retinal Research and the Vitreoretinal Fellowship. He then moved to Chicago to join Illinois Retina Associates where he worked for 5 years and restarted the Vitreoretinal Fellowship. He subsequently moved back to his hometown of Toronto 9 years ago to work at St Michael’s Hospital and opened the Toronto Retina Institute 5 years ago. He has served on the Board of Directors for the American Society of Retina Specialists as head of the Film Festival and Research. He co-founded the Canadian Retina Society, Best of Retina meeting and ASRS Fellows Forum for which he has also served as the Program Director for 8 years. He was the Editor in Chief of the journal Techinques in Ophthalmology and co-authored the textbook, Microincisional Vitrectomy Surgery. He has a textbook coming out shortly on OCT Angiography. He has authored over 70 publications and presented over 400 talks. His main interests have been vitreoretinal instrumentation for which he has patented and designed multiple instruments.